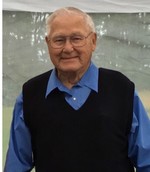 Carl W. (Ande) Anderson, who would have celebrated his 97th birthday today August 27, passed peacefully on August 10, 2019 at home with his family close by.He was born in Worcester, MA in 1922, the beloved son of the late Carl H. and Mildred (Romkey) Anderson. He married his wife, the late Diana LaFrancois, of Northbridge, MA on June 29, 1946.

He was a proud U.S. veteran and Life Time member of the American Legion of Somers. He served during WWII in the Army Air Corps at numerous airfields as a flight engineer/mechanic on various aircraft, including the B-17, B-25 and B29. He also held a private pilot license. He had a lifelong love of all things aeronautical thatlead to a 30+ year career in Experimental Test at Pratt & Whitney in East Hartford, CT, before retiring in 1980.

Carl was a majordo-it yourselfer, he would tackle any job big or small and avid car enthusiast,he loved working on his vehicles, doing it well into his nineties. He also enjoyed the family pets. He was a dedicated family man and he loved to drive around the United States, and take an occasional cruise. Some of his favorite places were visiting Smithsonian Museum, the Space Center, one of his old Military Stations or the Epcot Center/Disney. Many times just getting in the car and going there by himself just to relax on the beach and get away.

In lieu of flowers, the family asks that you consider making a donation in his memory to Honor Guard Firing Detail C/O MA Veterans Memorial Cemetery 1390 Main St Agawam,MA 01001 or to a Charity of one’s choice.