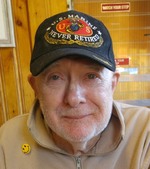 C. Thomas “Tom” Curtis, 83, of Marlborough, MA, and formerly of Enfield, CT, beloved husband of 55 years to the late Charlotte (Potter) Curtis, passed away Monday, June 10, 2019, at home, surrounded by his loving family.
He was born on January 1, 1936, son of the late Fredrick and Hazel (Lankton) Curtis, and resided in Enfield for 34 years before moving to Marlborough in 2007. Tom proudly served his country in the United States Marine Corps during the Korean War. After his service, he enjoyed a long career as a lithographer in the printing business until his retirement in 1976. Tom was an active member in the former Doric Masonic Lodge #94 AF & AM where he served as Past Master, former Grand Senior Steward, started the DeMolay for boys in Enfield, CT, and was advisor of the Rainbow Girls. In his free time, he enjoyed hunting, fishing camping, and photography.
Tom is survived by his children, Shirley Latulippe and her husband, Paul, of Chino Valley, AZ, Thomas E. Curtis and his wife, Karin, of Enfield, CT, Donald L. Curtis and his wife, Sherry, of Venta, OR, Dorothy Tea Molino and her husband, Ed Robinson of Boise, ID, and David Curtis and his wife, Kathyrn, of Marlborough, MA, with whom he made his home; his grandchildren, April-Jean, Andrew-Paul, Kathleen, Derrick, Gianmarco, Alessia, and Matthew Charles; nine great-grandchildren, and many nieces and nephews. He was predeceased by his brother Frederick, and his sisters, Dorothy and Harriet. Burial services with military honors will be private, at the convenience of the family. Donations in Tom’s memory may be made to St. Jude Children's Research Hospital, 501 St. Jude Place, Memphis, TN 38105. Leete-Stevens Enfield Chapels has care of the arrangements. For online expressions of sympathy, please visit www.leetestevens.com.