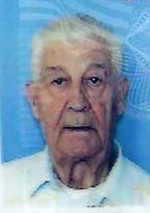 Giuseppe Orefice, 99, of Broad Brook, entered into Eternal Rest on Saturday, June 29, 2019, surrounded by his loving family. He was born and raised in Enna, Sicily, where he served in the Italian Air Force from 1940-1945. In 1956, he moved to the United States and settled in Enfield, where he made his home and raised his children with his former wife, Carolina (Puzar) Orefice. Giuseppe was employed with Bigelow Sanford Carpet Company and later retired from Hallmark Cards after 24 years. He was a faithful communicant of St. Patrick Church in Enfield, was a member of Mt. Carmel Society, and a member, as well as the former president of the Sons of Italy. Giuseppe is survived by his three loving sons, Salvatore (Sam) and his wife, Cindy Orefice of Enfield CT, Vladimiro (Miro) and his wife, Norma Orefice of Broad Brook, CT and Claudio and his wife, Helene Orefice of Somers CT; a son in law David Ferreira Sr. of Milford, MA; 13 adoring grandchildren and was blessed with many great grandchildren. In addition to Carolina (Puzar) Orefice, Giuseppe was predeceased by a daughter, Antonia Ferreira. Services and burial will be held privately. Giuseppe's family would like to extend a special thanks to Jennifer Gilkes for her care and compassion for the past six years. Donations in memory of Giuseppe may be made to Enfield Loaves and Fishes, P.O. Box 544 Enfield, CT 06083. To leave online condolences please visit www.leetestevens.com