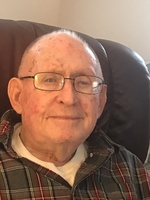 William "Bill" G. Sweetman, Jr., of Enfield, entered into Eternal Rest on Thursday, June 6, 2019, in the comfort of his own home, surrounded by his loving family. He was born in Stoneham, MA, the son to the late William and Marion (Keating) Sweetman. Bill was raised in Springfield, MA, and later moved to Enfield with his beloved wife of 62 years, Kathleen (Butler) Sweetman, where they made their home and raised their children. Bill proudly served our country in the United States Marine Corps as a Rifle Markman, where he was awarded the World War II Victory Medal. He was also a member of the Marine Police with the Enfield Police Department. He was a member of the Knights of Columbus, a faithful parishioner of St. Bernard Church, as well as a former parishioner of St. Martha Church. Bill was a hard worker, and was employed as a meat selector at A + P, as well as Sweetlife. He was an avid fan of the Red Sox and the NY Giants, and a Fish and Game Constable. Bill found his greatest joys in life through spending time with his family, enjoying trips to Myrtle Beach and going camping. He will be remembered as a loving and dedicated husband, father, grandfather, and great-grandfather. In addition to his beloved wife, Kathleen, Bill is survived by four children, William Sweetman and his wife Cheryl, Mary Lindsey and her husband, Paul, Nancy Sweetman, and Tim Sweetman and his wife, Kerry; grandchildren, Laura and Brenna Frost, Samantha Sweetman, Jennifer and Kyle McCurry, Rachel Lindsey and Matt Menard, Ashley and Chase Tyron, Caitlyn and Sarah Passmore, and Emily and Mollie Sweetman; and his three great grandchildren, Brenden McCurry, Colin McCurry, and Mason Menard. Bill was anxiously awaiting the arrival of two more great grandchildren in the next few months. Bill was predeceased by a brother, Lawrence Sweetman, and a grandson, Paul Lindsey. Relatives and friends are invited to join with the family for calling hours on Monday, June 10, 2019 from 9:00 - 11:00 am at Leete-Stevens Enfield Chapels, 61 South Rd., Enfield, CT 06082. A Mass of Christian Burial will follow at 11:30 am at St. Bernard Church, 426 Hazard Ave, Enfield, CT 06082. Burial will follow at St. Patrick's King Street Cemetery. Donations in memory of Bill may be made to St. Jude Children's Hospital, 262 Danny Thomas Place, Memphis, TN 38105. To leave online condolences please visit www.leetestevens.com