To share your memory on the wall of Robert W. Reynolds, Sr, sign in using one of the following options:

Provide comfort for the family by sending flowers or planting a tree in memory of Robert W. Reynolds, Sr

Provide comfort for the family by sending flowers or planting a tree in memory of Robert W. Reynolds, Sr

We encourage you to share your most beloved memories of Robert W. Reynolds, Sr here, so that the family and other loved ones can always see it. You can upload cherished photographs, or share your favorite stories, and can even comment on those shared by others.

Posted Aug 13, 2019 at 06:41am
I am thinking of you all. Bob was a special person and I truly enjoyed working with him. I had so many great conversations with him and he spoke so highly of his children - I loved hearing all the stories about his girls playing softball. He really did have a special place in my heart. Thinking of you all - Beth Heller (former Therapist at touchpoints)
Comment Share
Share via: 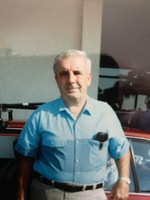